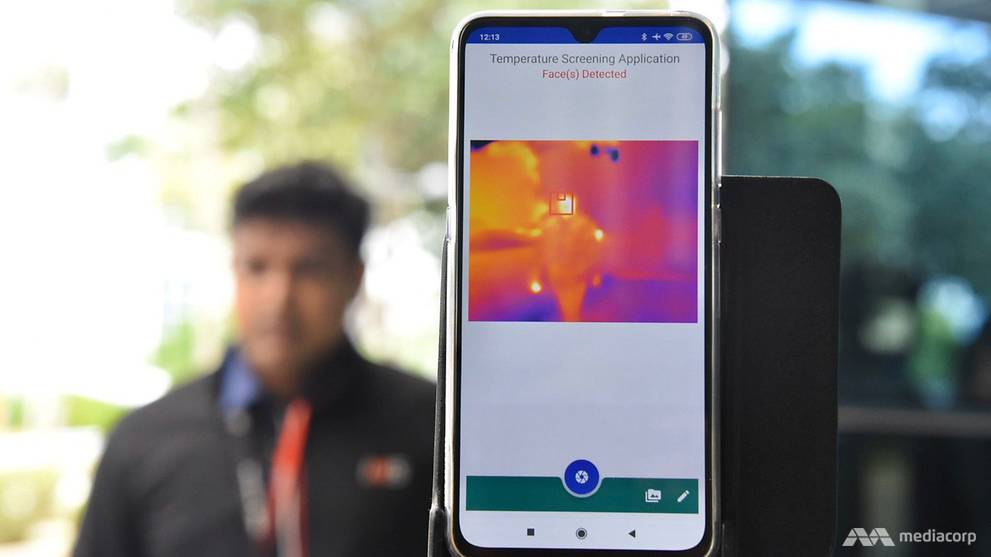 SINGAPORE: Temperature screening at office buildings could be up to five times faster with a new artificial intelligence-powered system by the Integrated Health Information System (IHiS) and healthcare technology company Kronikare.

The iThermo can screen eight to 10 people per minute, as compared to two to three people for manual screening, said Mr Chua Chee Yong, head of emerging services and capabilities at IHiS.

“(For manual screening), it ranges from 20 to 30 seconds to take a reading … That’s the maximum they can do,” he said.

“For the iThermo, we’re looking at about eight to 10 (screenings) per minute.”

Long queues have begun to form outside office buildings across Singapore in recent days after heightened precautionary measures were introduced to deal with the COVID-19 outbreak.

Queues for temperature screening were reported to last as long as 40 minutes at places like Suntec City.

Based off Kronikare’s Wound Scanner, the iThermo was developed in two weeks, and has been on trial at the IHiS headquarters and the St Andrew’s Community Hospital since Monday.

The 25cm by 12cm by 5cm iThermo comprises a smartphone camera, a thermal camera, and a laser camera, which can be mounted on a stand. Weighing 650g, it is easily deployed at entrances of places like office buildings and shopping malls.

Compared to manual screening, iThermo will be able to “reduce scanning fatigue, manpower and time”, said IHiS CEO Bruce Liang. Thus far, results have been “encouraging”, he said, noting that IHiS had received inquiries from healthcare institutions, banks and the retail sector.

It is also cheaper and more portable than high-end screeners deployed at airports.

“This is meant to bridge the gap between manual screening and the high-end screeners,” said Mr Chua of IHiS.

The iThermo will be rented out for S$1,000 a month. Fifty units will be available from mid-February and another 50 from the end of February.

The three cameras work to screen the body temperature of an individual, adjusted for ambient temperature and distance.

Unlike manual screening, iThermo can screen up to 10 people in a single frame. Low beeps indicate that the temperature has been recorded. If someone with a fever passes through, the system will alert a staff member with a higher-pitched sound. 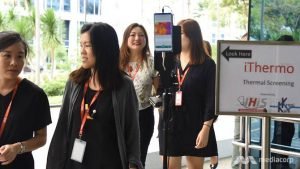 According to chief technology officer and co-founder of Kronikare, Hossein Nejati, the iThermo has a 100 per cent accuracy in screening patients with body temperatures of over 37.3 degrees when compared with a forehead thermometer during the proof-of-concept stage.

The system received a Class A certification from the Health Sciences Authority and Kronikare has ramped up the production of the iThermo.

Any cookies that may not be particularly necessary for the website to function and is used specifically to collect user personal data via analytics, ads, other embedded contents are termed as non-necessary cookies. It is mandatory to procure user consent prior to running these cookies on your website.