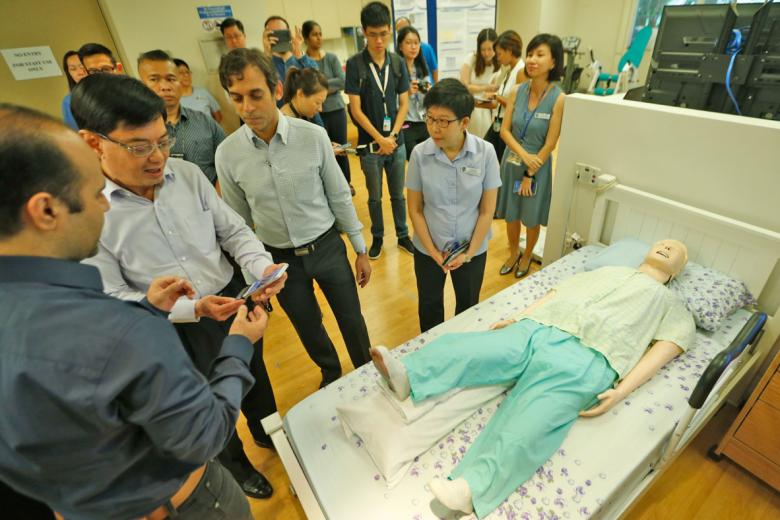 Healthcare spending to go up as medtech improves and population ages

This article first appeared on The New Paper (7 December 2017).

In the longer run, it is likely to rise further, said Finance Minister Heng Swee Keat yesterday. He was speaking to reporters after his tour of the St. Andrew’s Community Hospital (SACH) and the adjacent Changi General Hospital (CGH). Over the last five years, the Government’s annual healthcare spending has more than doubled, from around $4 billion in 2011 to around $10 billion last year. This is expected to increase to $13 billion in 2020 and this is just an initial estimate, said Mr Heng. “As medical technology improves, as our population ages, the demands will grow, and the need to provide for that will also grow,” he said. The Finance Minister, who chairs the Committee on the Future Economy, was touring the two hospitals to see how they have used technology and robotics to enhance productivity. SACH, for instance, is running a pilot that cuts down wound assessment from as long as 30 minutes to less than 30 seconds. Typically, nurses have to visually assess the wound, measure it and physically probe it – a process that may be painful. Since August, they have been using a smartphone fitted with an off-the-shelf thermal camera to take a picture of the wound. A phone application developed by local start-up KroniKare and funded by the Integrated Health Information Systems then documents and analyses the wound within seconds with the use of artificial intelligence. Details such as wound size and depth measurements are then presented on a phone dashboard. The wound care smart solution is just one of several technology and robotics projects aimed at delivering good and sustainable care in the face of higher demand from an ageing population. At CGH, more than 30 pilots have been conducted in settings from inpatient wards to rehabilitative therapy sessions to supporting operations, said assistant chief executive officer Selina Seah.

Projects that are scaled hospital-wide include the bed transporters. Close to 600 of these transporters will be rolled out in four public hospitals from June next year, she told The New Paper. The transporter reduces the number of people required to transfer patients on their beds – about 120 patients and beds daily – to another ward/department within the hospital, and is expected to reduce manpower by 34 porters and 19 nurses in total. “By reducing the physical strain of healthcare jobs, we aim to support our ageing workforce to continue working longer. The bed, patient and any equipment like a ventilator or drip, would weigh between 260kg and 360kg,” said Ms Seah.